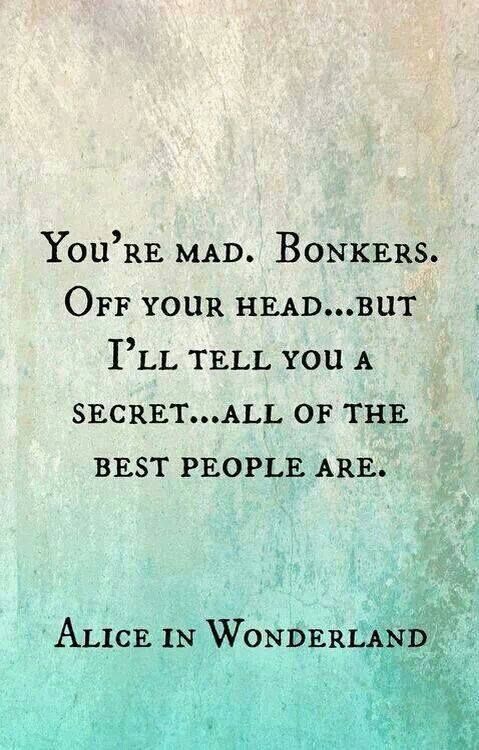 I’ve recently discovered the power of my thoughts and how they manifest into things. It sounds weird and strange especially if you’ve never taken your mind to the power of your thoughts. But think about it, you’re sitting at work and all you can think of is having something really tasty for dinner and then you get an invitation from a friend to go out for dinner, you’ve kind of manifested it just by thinking about it.

When you’re having a bad day, the saying goes “I got out of the wrong side of bed today”, you can carry on having a bad day just from that quote because you’re subconsciously telling yourself that the day started off like that so it’s going to carry on the same way. Whereas you can shift that by saying “things can only get better” and not even go down the negative path and see the positive in every situation that arises.

On Sunday I was having a browse through Pinterest for tattoo ideas and somehow stumbled across some quotes from “Alice In Wonderland”, I was inspired so saved a quote and posted it on Facebook. Then a few days later I was watching something random on YouTube and the vlogger mentioned “going down the rabbit hole” like in Alice In Wonderland, which freaked me out a bit. And then today I received a notification from Facebook telling me that 3 of my mutual friends are going to The Alice In Wonderland exhibition at the British Library today! Now to me all this is a little freaky, some may call it a coincidence and others may say it’s synchronicity. Recently I’ve seen a pattern in my thoughts and the conversations I have, things I mention seem to pop up in different ways after I have mentioned or thought about them.

As expected I watched the film to see what what I could learn from it, I watched the 1972 version on Netflix and there are so many hidden messages that we can take away from the story. Here are some of my favourite quotes from the amazing Lewis Carroll’s book/film:

“It’s no use going back to yesterday, because I was a different person then.”

“If everybody minded their own business, the world would go around a great deal faster than it does.”

“Have I gone mad? I’m afraid so, but let me tell you something, the best people usually are.”

“If you don’t know where you are going any road can take you there.”

I hope my ramblings help you to change any destructive thought patterns you may be having. It’s a tough old journey, this life business but I’m guessing if we stay focused on the positive, things will move towards that direction!

You may also enjoy: